Skip to content
Close Menu
< Back to all blog posts 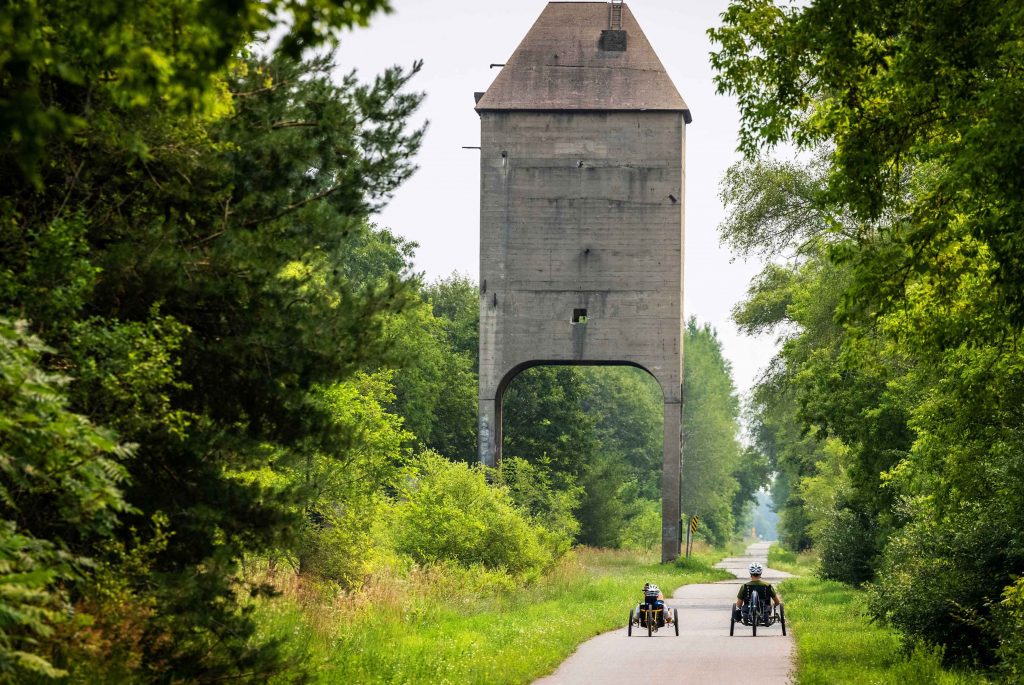 With whispering morning waves crashing into the still-dark shores of Ludington, MI, two trike tires splashed into the cold waters of Lake Michigan. A GreenSpeed Aero, known for its speed and aerodynamic proficiency, and a prototype electric Magnum, adorning a Bosch CX motor and two 500watt batteries. Their goal? Reach fresh water again. Only this time at the shores of Lake Huron, traversing across the entire state of Michigan. One day; 145 miles. How well would the Aero perform? How much would the electric assist impact the journey? Marshall and Mark of WizWheelz were about to find out.

Leaving the shore at 5:30am, Mark and Marshall began to crank away, heading east down the US-10. The smooth road combined with the GreenSpeed trikes helped catapult the two riders, as they reached average speeds of 23-25mph. Marshall is an experienced rider, having competed in Olympic Trails in his earlier years, while Mark fit the bill of a typical rider, and had not trained much for the ride. Soon, Mark and Marshall rode under a bright sun, dyed red from the smoke of Canadian wild fires burning in the north.

After reaching the first checkpoint in Baldwin, both Marshall and Mark felt positivity. Marshall pleased with the Aero’s dramatically impressive performance, and Mark positive from the smooth and consistent quality of the Bosch motor. But a new challenge faced them; next was the Pere Marquette Trail. This section of gravel/crushed limestone would prove to be slightly tougher. Onward to Reed City they began.

Dropping to an average 8-12mph, the gravel did slow Mark and Marshall. Perhaps what made it worse was a barrage of horse flies dive-bombing the trikes, and getting pulled along in backdraft as the riders cut through the trail. But the tide would soon turn at the 66-mile halfway point in Reed City.

The trikes reached their peak elevation as Mark and Marshall departed Reed City. Not only was this the halfway point, but it was the “summit” of their ride. From this point, a gradual downhill began that would help carry them to their fresh water finish. This came as a slight relief for Marshall, as his body was starting to feel the effects of the journey. For Mark, it started to become eye-opening as to just how much the e-assist equalized the two riders.

The analog vs. electric dynamic reached its peak in the last 20 miles of the journey. Though the Aero provides the best performance available, Marshall felt his body waining. At the same time, Mark still felt comfortable as the two tackled the final miles of the journey, with Marshall sometimes utilizing the draft off of the Magnum to help continue forward.

Nine-and-a-half hours. 145 miles. 1500ft in elevation. 33,600 pedal revolutions. Mark and Marshall finally reached sunny Bay City, where the breaking waves of Lake Huron called their names. As a final challenge, and to cement their ride as truly crossing the entire state, Mark and Marshall dragged their trikes across the sandy shores, so their tires could meet the water once again.

The beautifully challenging ride had been not only rewarding, but informative. Nothing demonstrated the performance and speed of the Aero better than this rigorous ride. Perhaps (more than likely) it would have been made much more challenging on any other analog trike. As for Mark, the e-assist solidified itself as the Great Equalizer. Knowing that the average rider could not only complete, but compete in such a journey made clear the importance of e-assistance.